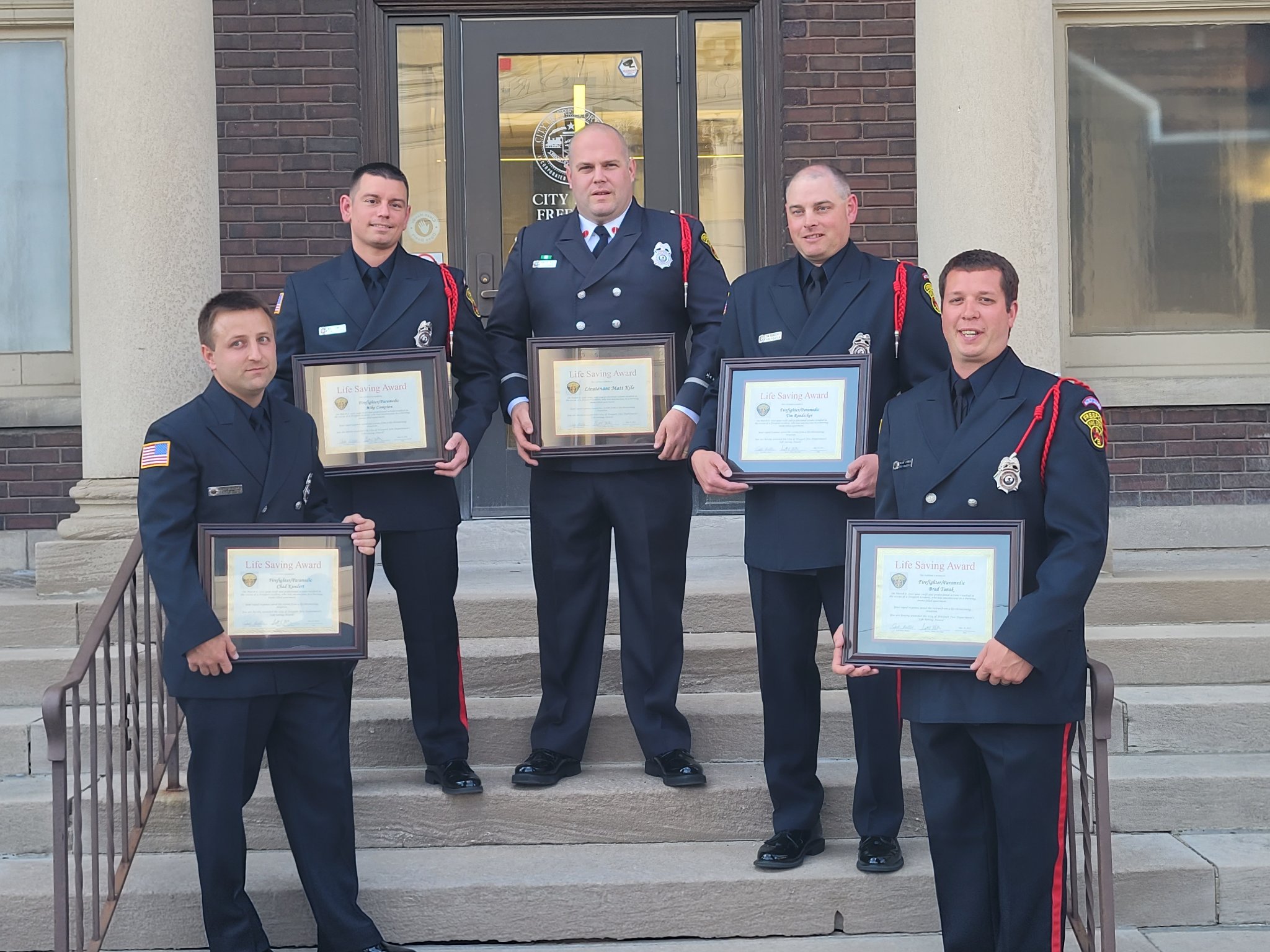 During the May 16th City Council meeting, Fire Chief Scott Miller of the Freeport Fire Department recognized firefighters and paramedics for the life-saving efforts that took place in early March.

On March 6, 2022, personnel from the Freeport Fire Department responded to the report of an activated smoke detector in an apartment on the 14th floor of the Hosmer Apartment Complex. The C-Shift crew members Lt. Matt Kile, along with firefighters Brad Tunak and Mike Compton, made entry into the smoke-filled apartment and discovered an unresponsive victim and a fire in the kitchen area.

The crew promptly worked to remove the individual to the hallway. With the victim removed, firefighters Tunak and Compton began resuscitation efforts, while Lt. Kile reentered the apartment to extinguish the kitchen fire and search for additional victims.

With the fire controlled, additional paramedics identified as Tim Randecker, Adam Holtz, and Chad Kundert directed their attention to patient care and transport of the victim to the FHN Emergency Room. Remaining crews worked towards final extinguishment and overhaul of the affected apartment.

Since the incident took place, the Freeport Fire Department was notified that the victim was transported to a Rockford-area facility for a higher level of care due to severe smoke inhalation. The individual has recovered from his injuries and was released.

Due to their prompt actions, Lt. Kile, firefighters Tunak and Compton, and paramedics Randecker, Holtz, and Kundert are being recognized for their critical roles in this life-saving incident. The other members on the scene that contributed to the positive outcome were District Chief Randy Seffrood, Lt. William Backus, Lt. Ernie Stabenow, firefighter Mark Honerbaum, and firefighter Brandon Jacobs.

“I’m very proud of our fire personnel in utilizing their training and experience in preventing a fatality and a potential major fire,” said City Manager Randy Bukas. “Their dedication and service to the city of Freeport is greatly appreciated.”

The recognition of these individuals furthers the City of Freeport Fire Department’s mission: to provide the citizens of Freeport with a skilled and professional fire department, to save the lives and protect property, and to lessen the impact of fire, medical emergencies, and catastrophic events.

Disclaimer:  Links on this page may take you to pages outside of the City’s website.  Please note that these pages may contain functions that allow you to “Send Feedback” or to post comments/questions.  Please note that these functions may be directed to third party sites and not to the City of Freeport. If you have any feedback intended for the City of Freeport, please contact the City directly.