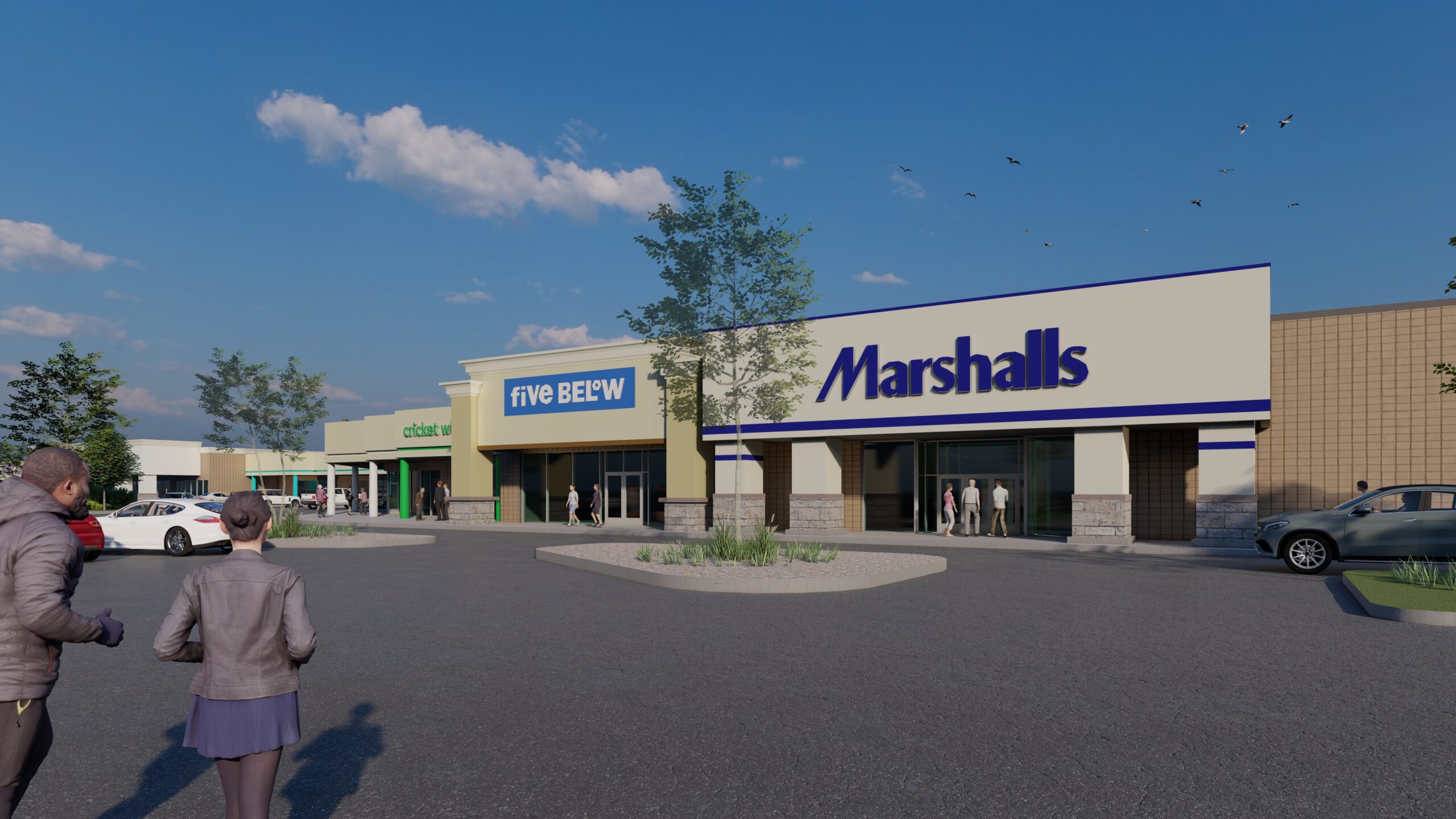 REDEVELOPMENT OF MEADOWS MALL TO BRING MARSHALLS, FIVE BELOW, & OTHERS TO FREEPORT

With the purchase of Meadows Mall, its developer, Freeport IL, LLC, has announced that it is bringing Marshalls, Five Below, Pet Supplies Plus and others to the shopping center. The Shopping Center, known as “Meadows Plaza” or “Meadows Mall” will be renamed, “The Meadows”. The total investment will exceed $11 million, which will include a major remodel of the Shopping Center to accommodate new retailers, building a dog park, and expanding and relocating current tenants.

This project has been in discussions since 2016. “Without Doug and Mark Winters, the former owners, this project wouldn’t be possible. They were helpful in the transition and selective with who would transition ownership for this redevelopment,” states Victor Baeten, Managing Member of Freeport IL, LLC “After 20 years of owning the center and being local residents themselves, they want the best for Freeport.”

While an initial loss to Freeport, the closing of JCPenney’s provided additional retail space to entice new tenants. Similarly, Hy-Vee’s incoming investment in the area added additional incentive for the new tenants coming to the rebranded center, The Meadows.

“Prior to the COVID-19 pandemic, the City had been in talks with Marshalls to bring them to Freeport. Talks cooled down when the pandemic hit,” says City Manager Randy Bukas. “We are thankful that the developer of this project was able to retain Marshall’s interest.”

“We’re excited for the opportunity,” Baeten continues. “Twelve to eighteen months from now this Shopping Center will look totally different and have new life in it.”  Baeten further noted regarding the former Kmart, “Hy-Vee purchased the former Kmart in 2021 and has already demolished the building to make room for their new store.  Since they own the parcel, we have no control over when they would open.  We have been in touch with their team and hope that they see the progress happening within our center and open sooner than later.”

Marshalls and Five Below are anticipated to open by Mid-November 2022, prior to the holiday season and Black Friday. Pet Supplies Plus will open by mid-2023 and additional retail tenants will soon follow the final two vacant spaces. Furthermore, JK Salon will be moving from their existing space near the Southern end of the Shopping Center to a combination of spaces on the Northern end between Bronzed Image and Cricket Wireless.

JK Salon is anticipated to move late 2022 or early 2023 when construction has been completed on their new salon space within the Shopping Center.  Until the official move please visit them at their existing space. There will be little to no downtime between their existing space closing to opening in the new space.

In 2023, Anytime Fitness will be expanding their space by over 50%. They will have a main entry to the parking area in front of the Shopping Center and adding a fresh updated look to Anytime Fitness space. Baeten mentions, “Conor, the owner, has been a great partner working around and sometimes directly through existing obstacles.” The space will now have some natural light, which Conor is most excited about.

“The Enterprise Zone, Tax Increment Financing (TIF), Commercial Property Assessed Clean Energy (C-PACE) program were necessary to move forward on the complete renovation of The Meadows. The Greater Freeport Partnership worked with Mr. Baeten, the City of Freeport, and area financial partners to help bring this exciting project to fruition. The complete renovation of the mall will secure retail tenants that are new to the market and fill vacant spaces. We understand the importance of having local, expansive retail choices for the retention and attraction of a talented workforce,” says Mark Williams, executive director of the Greater Freeport Partnership.

With all the improvements committed and only a few remaining spaces left, the shopping center is expected to be fully leased by the end of 2023.